It was terrific as always.

As mentioned to many of you, the day for mine is so much more than 6 hours with two amazing legends in world history… an indisputable claim certainly from an investment perspective.

Time at the Berkshire show is also a chance to learn, to strengthen one’s convictions, to further ingrain into Warren and Charlies life philosophies, to meet like-minded people and forge lasting friendships, to find and question investment opportunities, to indulge in a shopping frenzy and to just plain have fun.

As I’ve mentioned many times, if you love your cricket, spend as much time in the nets with Bradman as you can, when you can.

From an investment only perspective, the event reinforces Warren’s invaluable advice that;

“To invest successfully over a lifetime, it does not require a stratospheric IQ, unusual business insights or inside information. What’s needed is a sound intellectual framework for making decisions, and the ability to keep emotions from corroding that framework.”

Warren (now 87) and Charlie (94 yo!), sharp as ever, clearly prescribe and provide the proper framework, as do many of our Australian and International investment partners.

Fortitude’s role is to assist in providing the emotional discipline and rational behaviour that will see you over the longer term NOT get a poor result from your investments.

According to Warren, “that represents more of an accomplishment than you might think. Whether you achieve outstanding results will depend on the effort and intellect you apply to your investments, as well as on the amplitude of the stock market follies that prevail during your investing career …. The sillier the market’s behaviour, the greater the opportunity for the business like investor to profit from folly rather than participate in it.”

“You don’t have to be brilliant, only a little bit wiser than the other guys, on average, for a long time.”

Walter Lippmann spoke of people who plant trees that others will sit under …. Warren and Charlie are such people … and we are the lucky beneficiaries.

Click here to download a report of the big day from Tom Millner and Will Culbert from Contact Asset Management / BKI (9 pages), and here for a terrific, easy to read transcript of Warren and Charlie’s insights as documented by VGI Investment Partners (33 pages).

So much wisdom for you to peruse … Enjoy! 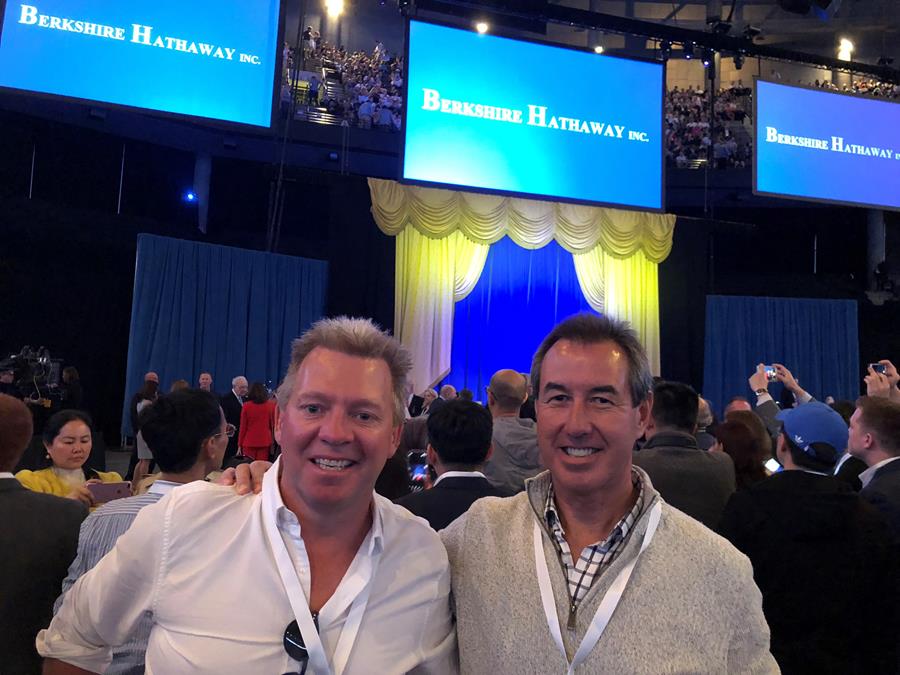 Two Aussies having an intimate moment with Warren (see far left back corner, next to the woman in red)

Here are some of my comments and two favourite pieces from the day.

It’s estimated 42,000 people were in attendance this year. The meeting begins with the annual Berkshire Hathaway film (approximately 1 hour of skits, videos, adverts, speeches and performances … lots of fun!). This year’s film included appearances from singer Jimmy Buffett, Bill Gates, basketball player LeBron James, Arnold Schwarzenegger, boxer Floyd Mayweather, baseball player Alex Rodriguez and singer Katy Perry. It also included the customary video of Warren Buffett’s testimony before a Congressional committee on the Salomon Brothers scandal in 1991, including his admonition to all staff: “Lose money for the firm, and I will be understanding. Lose a shred of reputation for the firm, and I will be ruthless.”

Opening Comment from Warren before opening up to Q & A

Warren: I would like to spend just a couple of minutes giving a little perspective on how you might want to think about long term investments as opposed to the tendency to focus on what’s happening today or even this minute.

To help me in doing that, I’d like to take you back to a little personal history. I have here a New York Times from the 12th May 1942. As you can see, I’m a little behind in my reading.

If you go back to that time, it was about three months since we got involved in a war which we were losing at that point. The newspaper headlines were filled with bad news from the Pacific. I’ve taken just a couple of the headlines from the days preceding 11th March 1942, which was a momentous day for me (Warren was 11 years old).

We were in big trouble in the Pacific. On 10th March 1942, the news was bad – “Foe (Japanese) Clearing Path to Australia.” The stock market was reflecting this. I had been watching a stock called Cities Service Preferred, which was sold at $84 the previous year and sold at $55 two months earlier in January 1942 and now it was down to $40. So that night, despite these headlines, I said to my Dad that I’d like to pull the trigger and asked him to buy me three shares. That was all I had, that was my capital accumulated over the previous five years. So, the next morning my Dad bought three shares.

The next day was not a good day. The Dow Jones Industrials broke 100 on the downside, the equivalent of a 500-point drop today and I was in school wondering what was going on.

My Dad bought my stock right away in the morning, as I had asked him, and I paid the high for the day, $38.25 was my tick. By the end of the day it was down to $37, which was characteristic of my timing in stocks.

But even though the War looked really bad until the Battle of Midway, the stock did rather well and went on to eventually be bought by the Cities Service Company for over $200 a share. But this is not a happy story. I made a total of $5.25 on this trade. When I had watched it go down to $27, it looked pretty good to take that profit (once it exceeded my cost price).

What’s the point of all this? Well, we can leave behind the Cities Service story and imagine yourself back on the 11th March 1942. As I said, things were bad in the European Theatre as well as in the Pacific. But everybody in this country knew that America was going to win the War. We’d gotten blindsided (Pearl Harbour), but we were going to win the War. And we knew that the American system had been working well since 1776.

Imagine if you had invested $10,000 at that time and put it into the S&P 500. Let’s say you put the $10,000 in and owned a piece of American business, and never looked at another stock quote or listened to anyone giving you advice. How much money might you have now?

All you had to do was figure that America was going to do well over time, that we would overcome the current difficulties, and that if America did well, then American business would do well. You didn’t have to pick out winning stocks or a winning time or anything of the sort. You basically just had to make one investment decision in your life. And that wasn’t the only time to do it. I could go back and pick other times that would work out to even greater gains.

So, as you listen to the questions and answers we have today, just remember that the overriding question is “how is American business going to do over your investing lifetime?”

I’d like to make one other comment that’s interesting. If you had taken that $10,000 and listened to the prophets of doom and gloom around you and instead you used the $10,000 to buy gold. For $10,000 you would have been able to buy about 300 ounces of gold in 1942. While American businesses were reinvesting in more plants and new inventions came along, you would have been able to go down every year to your safe deposit box and have your 300 ounces of gold. You could look at it, fondle it, but it would never produce anything. It was never going to produce anything. What would you have today? You would have 300 ounces of gold, just like you had in March 1942, and that would now be worth approximately $400,000.

So, if you had decided to go with a productive asset, which was earning money and reinvesting and paying dividends and maybe repurchasing stock, you would now have over 100 times the value of what you would have had with gold, a non-productive asset. For every dollar you would have made in American businesses you would have had less than a penny of gain by buying the store of value that people tell you to run to every time you get scared by the headlines. It’s just remarkable to me that we have operated in this country with the greatest tailwind that you can imagine at our back. You can’t really fail at it unless you buy the wrong stock or just get excited at the wrong time, but if you owned a cross-section of America and put your money in consistently over the years, there’s no comparison against owning something that is going to produce nothing, or against jumping into and out of stocks.

Crypto Currency … Is it a Bubble?

Warren: If you bought gold at the time of Christ and you figured the compound rate on it, it may be a couple tenths of 1%. It essentially is not going to deliver anything other than supposed scarcity because you can only mine so much, but so what? I mean, what does it produce itself?

The cheque is a wonderful idea. Just imagine how the world would be without being able to write cheques or have wire transfer funds. But it doesn’t make the cheque intrinsically itself worth a lot of money.

In the end, you make your money out of productive assets.

That’s an investment. When you buy something because you’re hoping tomorrow morning you’re going to wake up and the price will be higher, you need more people coming into it than are leaving.

And you can get that and it will feed on itself for a while and sometimes for a long while, and sometimes to extraordinary numbers, but they come to bad endings, and crypto currencies will come to a bad end. And along with the fact that there’s nothing being produced in the way of value from the asset, you also have the problem that it draws in a lot of charlatans.

It’s something where people who are of less than stellar character see an opportunity to clip people who are trying to get rich because their neighbour’s getting rich, buying stuff neither one of them understands. It will come to a bad ending. Charlie?

Charlie: Well, I like crypto currencies a lot less than you do.

And so, to me, it’s just dementia and I think the people who are rational traders going into trading crypto currencies, it’s just disgusting. It’s like somebody else is trading turds and you decide you can’t be left out.

For the select few that have made it this far, thanks for reading and I welcome your thoughts, calls or comments!